Beginning Excel for Business and Industry 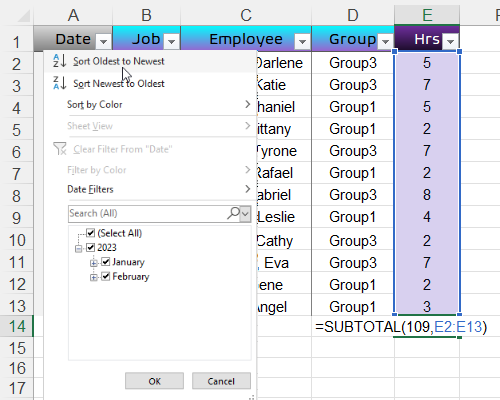 Your first step to mastering Excel.

How our training can help you.

Our 1-day workshop shows you the Excel skills needed to perform a variety of tasks in today's workplace. Businesses and organizations more than ever expect a higher degree of Excel skills than just a few years ago and our class will deliver for you.

Join us and we will show you the skill sets you need to get up and running in Excel fast.

How we run the class: We focus our beginning training on what our customers need. When training begins, we analyze those needs and shift our training outline appropriately. We will stress topics or add topics that our customers want. No two training sessions are ever the same with EMAGENIT.

How to Control and Select Workbooks, Worksheets, and Cells

Typing, Filling, and Setting the Number Format of Worksheet Data

How to Format Worksheets, Merge Cells, and Make Useful Forms

Using Drawing Shapes and Pictures to Enhance a Worksheet's Content

Laying Out a Worksheet Problem and Building Formulas for It

Printing Worksheets and Charts in Excel

Excel skills needed for our training.

Select this training if you or your group have:

If you need to contact us about our training.

You can email us at info@emagenit.com >

How to Use Cell and Range References in a Formula

By default, Excel uses what is called A1 reference style, which refers to columns with letters and refers to rows with numbers. These letters and numbers are called row and column headings. That is what is being used on this page.

If you see a formula and you start to see =R1C1+1 in it, you are in what is called R1C1 reference style. Only an advanced Excel user uses this notation and very rarely is it seen. To make the matter short, get out of this mode, refer to Excel help by typing in A1 Reference style to see how to toggle it back to the A1 style most commonly used.

What do the Dollar Signs Mean in a Cell or Range Reference?

When you place dollar signs around a cell  or range reference, you are preventing the reference from changing when you copy or paste a cell with a formula in it or drag it. Cell and range references can move relative to your copy and paste, that is what they are designed to do by nature.

For example, if you had a cell with a formula in it, say cell B2 = A1+1 and you copied cell B2 to B3 then the formula would shift to be cell B3 =A2+1 because it moved relative to your copy. If you wrapped dollar signs around A1 like =$A$1+1 then when you copied the formula it would stay fixed on cell A1 and not change.

To refer to another Excel worksheet, place the worksheet name in front of the reference followed by an explanation point !. For example, to refer to Sheet2 cell A1 the syntax (grammar) for a formula would be:

If the sheet name has non alpha-numeric characters or spaces in it, use apostrophes to enclose the name, for example for a worksheet named Data Sheet the syntax would be:

Note that if you build your formula by clicking and highlighting cells with the mouse, Excel will build the basic cell references including sheet names automatically.

To build a formula that refers to cells on another worksheet with the mouse, first type an = sign in a cell. Next click on the tab that has the cells or range to use and select them with the mouse. Watch the formula bar above the column headers and you will see the formula being built.

When you are on another worksheet, you can click in the formula and add operators and values. You build the formula the exact way as discussed on the previous page.

When you are done building the formula just press Enter. You do not click back on the original worksheet tab as this may skew the formula if the last entry is a cell or range reference

What is an Excel Formula and How Does It Work?

An Excel formula is what you type in a worksheet cell to perform a calculation on a Microsoft Excel worksheet. Basic Microsoft Excel formulas basically look like normal math equations with computer operators standing in for some traditional math operators. The basic operators used in a formula are: Division: /, Multiplication: *, Addition: +,  Subtraction: -, and Power: ^.

To begin a formula in a cell, you type an = sign followed by operators, cell references, and numbers. For example if you typed =16.95 * 25 in a worksheet cell the value returned would be 423.75. To make the formula adaptive, you can replace the 16.95 and 25 with cell references like = C6 * C7. When enter is pressed, the formula will multiply the values that are in cells C6 and C7 and display the value in the cell. If either C6 or C7 is changed in value and Enter is pressed, the formula referencing those cells will recalculate automatically displaying the new value.

The example above demonstrates what a formula looks like in a worksheet cell and how it calculates. Input and Output areas are designated on the worksheet to let the user know where information is typed (inputs) and where the formulas are (outputs). While simple in construct, it begins to show interface construction and organization help a user find things on a worksheet.

How to Build a Formula in an Excel Worksheet Cell

Repeat this process until you are finished building the formula then press Enter. Note when mixing operators like = 5 + 3 * 2 in a formula, there is an operator precedence which means certain operations occur before others. In this case 3 * 2 runs first followed by + 5. That is why you use ()'s to override this order and force operations to go first like (5+3) then * 2.

The example above demonstrates how to type a formula in a worksheet cell using the mouse and keyboard. When entering a cell reference in a formula, it is best to click on it with the mouse so you do not make a typing error.

Excel allows an individual to use two styles of cell references > to identify a cell’s position in a formula >, A1 and R1C1 reference styles. These styles are controlled by adjusting the controlling options of Microsoft Excel.

In this mode, cells are referenced in formulas using a letter for the column and a number for the row. The picture below demonstrates this concept with a simple formula.

The example above demonstrates what A1 reference style looks like in Excel. Notice the column headers are letters. This is the most common way to build formulas in Excel. Note that cell references appear in the formula with a letter and a number.

What is an R1C1 Style Cell Reference in an Excel Formula?

In this mode, cells are referenced by relative nomenclature R[-1]C[-1] or in absolute nomenclature R1C1. The letters R and C are used in both modes to represent row / column positions.

The picture below demonstrates this concept with a simple formula where the cells are referenced in R1C1 absolute nomenclature.

The example above demonstrates what R1C1 mode looks like in Excel Notice the column headers are numbers. Generally you do not build formulas in this mode, the author does not.

How to Switch Between A1 and R1C1 Cell Reference Modes on the Worksheet?

If you do not use the proper syntax, an error will be generated when the formula is entered. The A1 reference style is the easiest to use in Excel. It is recommended that this style is used when constructing formulas.

To switch between the reference modes in Excel, proceed to the Ribbon and select File / Options. On the Excel Options screen, select the Formulas tab. On that tab, check or uncheck the R1C1 reference style box. Note that when you toggle this box, the reference notation in the formulas will toggle.

When dealing with Excel and its many features and quirks, always recheck everything if switching.

The example above demonstrates the Excel Options dialog box and how to toggle reference style mode. This is the control panel for how Excel operates. Be sure to check out the Advanced tab and General tabs as they contain a lot of Excel functionality control.
Need Help? Please call us at 1.805.498.7162

- Beginning Excel for Business and Industry

- Intermediate Excel for Business and Industry

- Advanced Excel for Business and Industry

- Excel Dashboards for Business and Industry

- Microsoft Excel for Engineers for Scientists

- Excel VBA for Engineers and Scientists

- Excel Training for US Military